Infidelity Doesn’t Just Happen To The Rich And Famous. You don’t have to be a movie star, politician, or multimillionaire to be a cheater. You don’t have to be hot looking or even have sex appeal to be part of the infidelity statistics. As a Marriage Counselor working with couples for over 25 years this population includes your next door neighbor, your pediatrician, child’s teacher, best friend, and sorry for you to hear this, but clergy, too. Infidelity Doesn’t Just Happen To The Rich And Famous

Anyone can be a cheater – according to a Study by The National Marriage Project there is no one demographic. The study also indicates high school drop outs and couples in which one partner is mostly dependent on the other for income are more apt to stray. That a another reason why I encourage women to have their own job earning their own money. I believe people cheat because sometimes it’s just easier to be different with a different person. Actors tend to move from one relationship to another as their roles keep them engaged with their leading man/woman. They feel alive and excited as with anything that is a novelty. As with novelty it becomes normalized through the process of time. 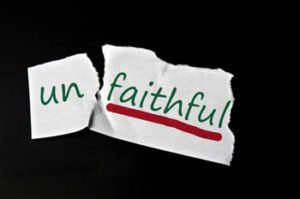 The grass is not always greener on the side.  Sometimes it makes sense to work out your problems in an existing relationship rather than move on to a new relationship you know little about. In this Country fifty percent of first marriages end in divorce. 67% percent for second marriages and 73% for third marriages.

If you suspect your partner is cheating – discuss it: you have the right to bring it up your suspicions and fears. Trust and communication is the foundation of a good relationship.

No one is immune from infidelity. If you or someone you know is part of the above stats please contact me at (858) 735 1139 as there are remedies to recover from what may seem like an irreversible situation