Are You Codependent?  What is it about you where you continue to stay in a relationship that isn’t working?  Do you tend to feed off the neediness of others and devote all your energy to what they want? Codependency is a behavioral condition in a relationship where one person enables another person’s addiction, poor mental health, immaturity, irresponsibility, or under-achievement. Among the core characteristics of codependency is an excessive reliance on other people for approval and a sense of identity. Codependency in relationships is an excessive emotional or psychological reliance on a partner. Where in healthy relationships the two should be interdependent of one another and not dependent.

Initially, codependency was used in the context of substance abuse, where one person is abusing the substance and he or she depends on the other person (enabler) to supply the basic needs of life; food, shelter, and financial resources, as well as emotional well-being.

As a Marriage Counselor, I help individuals understand their mood, happiness, and identity are not to be determined by what other people think or feel about them. The word “codependency” gets thrown around a lot.

Are you in a Codependent relationship?  I have been working with a young woman who has been seeing a married man for ten years.  She is your typical cliche of a mistress who was naive at the beginning and believed most of what was said to her about how he can’t leave and get a divorce just yet because he doesn’t want to hurt his wife or the children.  Years later, nothing changes except everyone is now ten years older and a bit wiser or not.  I have another woman who is involved with a married man whose wife became pregnant during their affair.  As a Marriage Counselor, I bring to their attention that they may be exercising codependent behavior.  Rather than say, “hey, look the writing’s on the wall,” or  “what the f**k are you thinking?”  I share some of the signs they may be codependent or are in a codependent relationship. 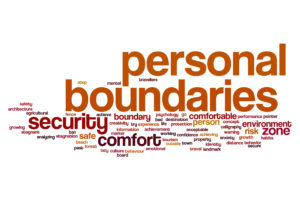 Boundaries – Do you have them?  People focus so much on being loving and giving that they forget their own limits and limitations.  Have you ever found yourself wondering can I set limits and still be a loving person? Boundaries are put in place to set healthy limits with your parents, spouses, children, friends, coworkers, and even oneself.  How do I answer someone who wants my time, energy or money?  Why do I feel guilty when I consider setting boundaries?  Being able to set boundaries is an invaluable tool as it helps you gain control of your life.  Without them, people can take advantage of you.

There is an amount of codependency in healthy relationships where there is give and take.  It becomes a problem when you seek out, maintain or feed off relationships that are not satisfying.  A big indicator you may be codependent is realizing and acknowledging most of your relationships are not working for you.  The inability of not being self-aware makes moving forward challenging.  Once identified codependency can be successfully treated.

If you can relate to anything I just shared please give me a call (858) 735-1139 so you can start feeling better about yourself and all your relationships.

Life Lessons Our Parents Didn’t Teach Us.  I don’t know about you but as a “baby boomer” and parents of immigrants from a developing Country, there was not much time nor opportunity to learn life lessons outside of what public school taught us and that wasn’t much.  Wisdom lies in acting on the world as it is, not as we wish it to be.  Here are 10 skills that can clarify your visions and bring you closer to your life goals. As a Marriage and Family Therapist working with individuals, couples, and families, I stress the importance of developing a greater sense of self so you can decide for yourself what is needed for your happiness.  Listening to your intuition is a guide that should not be ignored as it can lead you to realize what is right and wrong for you.  Everyone is entitled to their thoughts and feelings and more importantly, so do you.  As you trust and come to know yourself better the above 10 skills can help you live the life that is congruent to what you know and feel.

Don’t let others decide what is best for you.  If you have a feeling that doesn’t feel right with their wants don’t give into it.  Do what you believe is in your best interest and don’t feel like you’ve done something wrong.  For more information on obtaining what it is you want for your happiness please call me at (858) 735-1139.